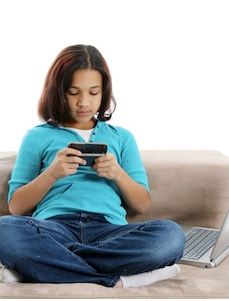 Has your child’s cell phone become an extension of her hand? Between talking, texting, tweeting, taking pictures, sending emails, and playing games, kids have access to an endless amount of entertainment with their cell phones. This can get exceedingly frustrating for parents who rarely see more than the top of their children’s heads. Concerned parents are finding it more and more difficult to get their kids to pay attention to anything besides their phones.

For those who are encountering resistance, here are 10 ways to get your child to put down her cell phone.

The main reason parents typically give their children cell phones is so they can be contacted in the event of an emergency. Unfortunately the advances in technology have turned a necessary tool into a source of constant entertainment. Before allowing your child to get a cell phone, set realistic guidelines and make sure you enforce them. It’s much easier to stick to established rules than to try and enforce new ones after things have gotten out of hand. Just like any other addiction, too much attachment to a cell phone is not healthy. Get your child to put the phone down and enjoy all the other wonders life has to offer.