Back To School … Back To Bullying Prevention With Stomp Out Bullying™ 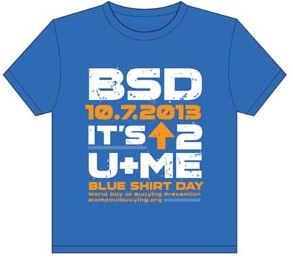 As students prepare to return to school, the one thing many are not looking forward to is being bullied. That is the reality for many victims at school, on playgrounds and online. In fact 13 Million kids will be bullied this year in the United States.

To signify the importance of National Bullying Prevention Awareness month, STOMP Out Bullying™ created Blue Shirt Day™ World Day of Bullying Prevention. It is observed on the first Monday of October. On this day, we ask kids and adults alike make Monday, October 7th, the day that bullying prevention is heard around the world by wearing a Blue Shirt in solidarity to STOMP Out Bullying.

This year’s campaign sponsored by Bon-Ton Stores, Inc. not only offers a newly designed “2013 limited edition” blue shirt, but offers a PSA created by SJI Associates, animated by Ataboy Studios, produced by Delusions NY and distributed by Tylie Jones. The song “Stand Up” was donated by Sugarland.

The PSA will air on major TV and cable networks, as well as online. Additionally, a social media campaign will be a large component of the campaign.

Ross Ellis, Founder and Chief Executive Officer of STOMP Out Bullying™ said: “Kids who are intimidated, threatened, or harmed by bullies and cyberbullies often experience low self-esteem and depression. Some take their lives as an alternative. Many do not understand how extreme bullying can get. Parents, teachers and school administrators must use sensitivity in handling these issues. They must also work to make the victims more resilient, as well as working to help change the behavior of the bully. Schools cannot continue to sweep the issue under the rug.”

STOMP Out Bullying offers students a safe haven. From information and resources, to an online area where youths can talk about the issue, to getting involved in social media efforts, an area where students can upload videos about their experiences with bullying and why they want to end bullying and a HelpChat Line for kids and teens who are bullied, cyberbullied and at-risk for suicide. Created in late 2011, the HelpChat Line has helped over 7600 students and saved 84 lives to date.

We ask kids, teens and adults to participate in BLUE SHIRT DAY™ WORLD DAY OF BULLYING PREVENTION by wearing the STOMP Out Bullying™ “2013 Limited Edition” blue T-shirt or wearing their own blue shirt – as long as they GO BLUE! Shirts are available at www.stompoutbullying.org and bonton.com/bts.

The price of each shirt is $12 and Bon-Ton Stores Inc. will donate $8 of each sale to STOMP Out Bullying. In addition to being the official BLUE SHIRT DAY™ WORLD DAY OF BULLYING PREVENTION sponsor, Bon-Ton Stores Inc. has created an interactive social media campaign that offers shoppers discounts and an additional donation. To launch the program, Bon-Ton will host a back-to-school sweepstakes on their Facebook page from August 5 – September 7th. Visit facebook.com/bonton for details.

Brendan Hoffman, President and CEO, The Bon-Ton Stores, Inc., said, “All of us at the Bon-Ton want  to make a difference in our children’s lives during this back-to-school season  and what better way than to support “STOMP Out Bullying, ” a national organization focused on eradicating bullying in our schools and communities.  Our hope is that parents, teachers and children will participate in the Fifth Annual Blue Shirt Day™ World Day of Bullying Prevention and stand up to bullies everywhere.”

Ellis said: We are so grateful to our partners joining us in this fight to STOMP Out Bullying. Bullying can be so painful and clearly has played a role in many suicides across the country. And cyberbullying is in full force with the use of social media sites like Facebook, Twitter, and other sites popular with kids and teens. This social online cruelty is used by individuals or groups intending to harass and harm our youth. Bullying starts as early as kindergarten. We must look at prevention as a community issue. It’s up to parents, schools, law enforcement and students to work together to educate and prevent – putting an end to the violence and to the suicides.”

It is critical to educate students about the harmful effects of bullying and cyberbullying. They can begin by observing and participating in BLUE SHIRT DAY™ WORLD DAY OF BULLYING PREVENTION and National Bullying Prevention Awareness month.

– 1 out of 4 kids are Bullied.
– 9 out of 10 LGBT students experience harassment at school.
– Depending on their ages, up to 43% of kids and teens report being digitally harassed
– 8% of kids stay home from school each day due to the fear of being bullied

To learn more about helping your kids and teens handle bullying or if your child is a bully, visit www.stompoutbullying.org.

About STOMP Out Bullying
The leading national anti-bullying and cyberbullying organization for kids and teens in the U.S. Created in 2005, it focuses on reducing and preventing bullying, cyberbullying, sexting and other digital abuse, educating against homophobia, racism and hatred, decreasing school absenteeism, and deterring violence in schools, online and in communities across the country. It teaches effective solutions on how to respond to all forms of bullying; as well as educating kids and teens in school and online, providing help for those in need and at risk of suicide, raising awareness, peer mentoring programs in schools, public service announcements by noted celebrities, and social media campaigns. An additional focus educates parents on how to keep their children safe and responsible online.  www.stompoutbullying.org, http://www.facebook.com/StompOutBullying  Twitter: @STOMPoutBullyng  #STOMPOutBullying

The Bon-Ton Stores, Inc., with corporate headquarters in York, Pennsylvania and Milwaukee, Wisconsin, operates 270 department stores, which include 10 furniture galleries, in 24 states in the Northeast, Midwest and upper Great Plains under the Bon-Ton, Bergner’s, Boston Store, Carson’s, Elder-Beerman, Herberger’s and Younkers nameplates. The stores offer a broad assortment of national and private brand fashion apparel and accessories for women, men and children, as well as cosmetics and home furnishings. The Bon-Ton Stores, Inc. is an active and positive participant in the communities it serves. Facebook.com/bonton.com, Twitter: @bonton