Beware of Bad Influences for Our Teens 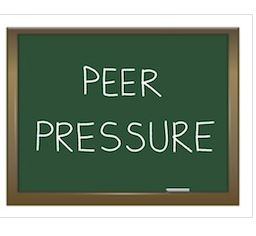 I have two children which are seven years apart. I was blessed that my oldest was a girl and that she is a strong child with high moral standards. I cannot take any credit for her being that way, it all the grace of God, she was born that way. My son was also a loving and obedient child but he was more quizzical and wanted to try things out for himself. I was just very thankful that his older sibling was a good example.

I found this out the hard way. When my son was about twelve years old I had a nephew that was having some trouble at home. He asked me if he could come live with us because he was from a small town and there were no jobs. He was eighteen at the time. I knew he had some behavioral issues and we discussed at length what I expected from him and he promised me up and down that he would be on his best behavior. One of my rules was that he not do drugs or drink alcohol. He also smoked cigarettes and I told him that he had to smoke outdoors and I made him give his word that he would not try and influence my son in any way.

At first everything was fine but I noticed my son wanting to be around him more and more. I watched them very closely and actually felt like I was going to lose my mind following them around the house or outside checking on them to make sure everything was on the up and up. My intuition proved to be correct when one evening my son came in the house and went to his room very quickly. My son was thirteen at this point and my nephew at been there for about eight months. When I reached his room I found him on the floor and I couldn’t rouse him. I was terrified! I thought he might be having a seizure or be in a diabetic coma, I just did not know. When I was sufficiently terrified and getting ready to call an ambulance my nephew spoke up and said that he had seen him at the next door neighbors where he “found” some beer and had chugged two large sized beers.

I talked to my son about this when he was functioning again and he concurred with the story. So, I thought it was just curiosity on the part of my son and we wrote it off as a learning experience. There were several other minor incidents that were really beginning to wear on my patience such as when I told my nephew I wanted him in the house by eleven during the weekdays and one o’clock on the weekends. He said sure and then I found him on more than one occasion climbing out the upstairs window in my son’s room. My son did not want to tell on him but he would come down out of his room and tell me he did not feel good and wanted to stay in my room. I always knew there was something wrong and would go check. My son started getting upset because he did not like to keep secrets but also did not like it when his cousin would get angry at him for telling. It was not working out.

After all this started happening I knew things were not going to work out. A few weeks later I heard my nephew ask my son to go out in the backyard so I waited a few minutes and decided to go check up on them. When I rounded the side of the house I found them sniffing a gas can and neither one of them could even speak when I gasped in horror and demanded to know what they thought they were doing! I could not believe that a nineteen year old man would be doing something so ignorant let alone doing it with a thirteen year old boy.

I of course insisted that he find another place to live. I was so hurt and confused. And I did not understand why my nephew, who I had opened a place in my home, had betrayed my trust like that. I also was shocked to find out that my son was so ignorant and would follow along in something so wrong.

After my nephew had been gone for a couple of years or so my son divulged so many things that my nephew had taught him and drugs that he had offered, some that my son had actually taken him up on. He filled me in on the beer incident and said that it was my nephew’s beer that he had gotten from the neighbor and talked him into drinking it. (The only good thing that came out of that is that to this day he hates to drink.) He blamed me for letting him into our home and said that he was the reason he was smoking cigarettes and marijuana. Now I am not dumb enough to think that my son if so inclined could not have gotten into these things on his own but I do think it would have taken a lot longer and wouldn’t have been such easy access.

I am telling you call this because I was so ignorant about the influence that my nephew was going to have on my son. I am a firm believer in the scripture from the Bible that says, “Do not be deceived: “Bad company corrupts good morals.” 1 Corinthians 15:33 (NAS) I believe that even the strongest of individuals can be pulled down by bad company, let alone a younger naïve child that hasn’t been around behavior like my nephews. My son did not have siblings close to his age, no brother to look up to and then I allowed my nephew into our home who I already knew was doing things he should not.

I wanted to share this story with you so that if you have younger children and there is a big age difference between them that you use wisdom in who you allow the older sibling to bring into your home. If you know that your older child is doing things they should not you should take special care and not leave them to babysit or leave the younger in their charge because you are of the mind that they are their sibling and will protect them. You are the best judge of this; there are some siblings that are very protective of the younger kids even if they are not doing the right thing themselves, but not all. And whatever you do don’t let an older child come to live in your home if they are already doing something outside of the rules and expect them not to influence your younger children. It is not happening.

As I look back I wish I had done things differently. I had the right motives in wanting to help my nephew but did not use wisdom and did not grasp the implications of what I was allowing into my son’s life. My first responsibility was to my son and his well being, not to my nephew. I am the kind of person that wants to help everyone but you can not do so at the expense of your children. For some of you this sounds like a no brainer but for those of who are like me, who have hearts that do not always listen to our brains, I wanted to warn you of the consequences.

This guest post was provided by Allison Foster. She has a solid writing resume that includes blogging both personally and professionally and regular freelance writing and photography jobs. She has enjoyed furthering her writing career with www.nannyclassifieds.com .