As cyberbullying continues to be a major issue for many people of all ages in the United States, New Zealand’s government has passed a law designed to protect children from cyberbullying.

The Harmful Digital Communications law is only meant for the most serious cases.

Children under 14 can’t be charged with cyberbullying, while children between 14 and 16 will go into the youth justice system. In addition, the bill creates a separate crime of incitement to suicide, which will see a person jailed for up to three years if they are found to be encouraging such an act.

Under the new law, authorities can fine or imprison people up to two years who post “harmful digital communication.”

It reads in part: 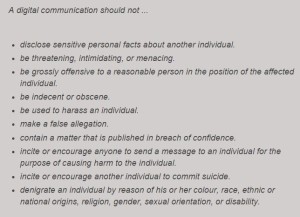 Isn’t it sad that we have to instruct people to be kind to each other?

However that is exactly how the Internet has become, especially social media, people are using their keyboard as a lethal weapon – and sadly this is what it has come to.

People will use their keystrokes without realizing there is a living, breathing human on the other-side of the screen.  The emotional scars can live for years – while they feel like dying inside.

It brings us to the bystanders.

According to a new study published in the National Communication Association’s Communication Monographs, researchers examined bystander intervention in cyberbullying and found promising results that explain why many witnesses or bystanders choose not to intervene in defense of a victim.

It seems people don’t want to get involved.  If you watched Dateline’s special “My Kid Would Never Do That” when it featured the cyberbullying  and bullying segment, parents were quickly made aware that when kids are confronted with people they didn’t know that were being cruel (bullies), it was more difficult to be an upstander.

Being an upstander is important.  You never know when you will need someone to be there for you.

How to be an upstander: