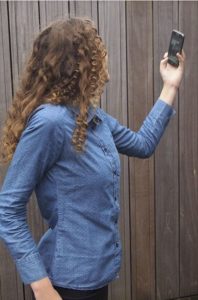 No one is disputing we live in a different time now, when technology rules and texting is basically your teen’s first language.

What hasn’t changed is teens and their desire to keep some of their life to themselves, or conveniently not share everything with their parents. Let’s face it — if we all honestly think back to our own childhood, isn’t there anything you kept from your parents?

The recent study from National Cyber Security Alliance on teen internet use found that only 13% of teens thought their parents understood the extent of their internet use.

What’s troubling about this is the fact that the internet, [unlike most things/secrets we (adults/parents) kept from our parents or our parents were oblivious to], can be a minefield of trouble if not used responsibly and with respect for others.

The internet, as a matter of fact, can even affect your future — as we saw another new survey release this week  by Monster. More than one-third of employers are rejecting applicants after reviewing their social media profiles. This concurs with Career Builder’s survey in 2015. For those students hoping to go on to college, in Kaplan’s 2015 survey, 40% of college admissions officers will browse social media profiles to learn more about their potential candidate.

Between your teen’s future higher education and employment, unlike in previous generations, their interview starts the moment they get a keypad.

With this information, parents should want to be more digitally involved  — we know they are involved in their kids GPA, think of social media  as a core class, in reality – it is. You never get a second chance to make a first impression.

Once they (college recruiters/employers) dismiss you online – you’re dismissed offline too. They simply go on to the next candidate.

It’s not only your teen’s online reputation at risk by parents not getting involved, more concerning is the emotional turmoil  a teen could be going through a due to online harassment, cyberbullying, sextortation or virtual abuse — and if parents are not in tune with their teen’s digital life, this could go unnoticed and spiral into depression or worse.

In yet another study released this month, “Toxic Ties: Networks of Friendship, Dating, and Cyber Victimization,” it revealed that cyberbullying is more common between friends or former friends, such as relationship breakups.  This is not a shocking revelation, in my opinion, especially when we see the peer to peer bullying and teasing offline.

“We believe that competition for status and esteem represents one reason behind peer cyberbullying,” Felmlee said. “Friends, or former friends, are particularly likely to find themselves in situations in which they are vying for the same school, club, and/or sport positions and social connections. In terms of dating partners, young people often have resentful and hurt feelings as a result of a breakup, and they may take out these feelings on a former partner via cyber aggression. They might also believe they can win back a previous boyfriend or girlfriend, or prevent that person from breaking up with them or dating someone else, by embarrassing or harassing him or her.”

With both online and offline friendships that can breakdown, parents need to be involved in both areas of their child’s lives.

There will always be new apps, new social platforms and new devices. Parental monitoring systems are good – but nothing replaces parenting. I believe it’s worth noting, you must be a parent first — you can become their friend on these sites, but know you are there as a parent. It doesn’t mean you embarrass or humiliate your child, it means you can discuss with them their choices offline – calmly – if you feel they are making risky digital decisions. Be prepared to back up why you are questioning their comments or posts. You never want to alienate your teen.

We must also remember, it’s not the app, the social media platform or the device — it’s human behavior that we must address. It’s why parent involvement is imperative.

In the first survey, it stated that 60% of teens have created accounts for apps or social media sites without their parents’ knowledge. In reality, I’m not shocked by that. How many sites have you signed up for and not shared it with someone? Especially if no one asked you.

It’s probably not the same (since we’re adults), however teens believe they are invincible and parents it’s our job to continue to be interested in their online life. So where do you start?

Teens love technology, they love social media, they love apps so you have to get in the tech world with them.

Maybe you need to understand why tweens and teens don’t tell their parents about online issues as it pertains to cyberbullying:

1)  Fear of consequences: Your child’s online existence is a critical part of their social life. With all their friends online, being excluded would be devastating them. They don’t want to risk you banning them from their friends and their digital lives.

This is why your consistence offline chats, assuring them that you are their advocate helps them to know you are there for them.

2)  Humiliation and embarrassment: Our kids are human and have feelings. Although some kids portray a tough persona and believe they are invincible, deep down everyone feels hurt by cruel keystrokes. Your child may fear looking stupid or weak. If the incident gets reported to their school, will they be able to face their classmates? Imagine the horror of a child hearing from peers after being bullied that they somehow deserved it, brought it on themselves or should have just toughened it out rather than be a snitch.

This is why sharing news stories, as well as personal stories, can help your child know they’re not alone. Your offline conversations are imperative to build your child’s self-esteem to come to you when they are having online issues.

Okay parents, here’s your first challenge to post on your Facebook walls, (since all parents have FB accounts) and talk to your teen’s about. Distracted driving has become a serious issue globally. I don’t think I need to get into the statistics for people to understand that within seconds your life can change with one click.

Teens today (and I venture to say, adults too) are attached to their gadgets, so much so that unplugging for a simple car ride has become almost impossible for some. Their life has become dependent upon their clicks, LIKEs, beeps, dings, texts, etc….