April is Distracted Driving Awareness Month. A time when we should all take a moment to remind each other that it’s never okay to double task while driving.

It’s as simple as a glance.

Distracted driving is NEVER OK. You’re never alone on the road, even when you’re alone in your car. That’s the simple message behind AT&T’s IT CAN WAIT campaign against distracted driving. Research by AT&T shows smartphone distractions behind the wheel have grown beyond texting to social media, web surfing, selfies, and video chatting. With Distracted Driving Awareness Month beginning April 1, AT&T is urging you to take the IT CAN WAIT pledge.

Here is what AT&T has learned through its research: 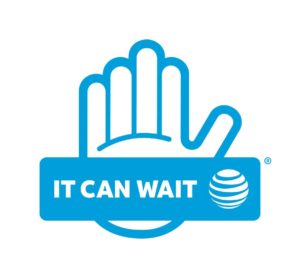 Power of a Pledge:

o   4-in-10 asked a friend or family member to not use their smartphone while driving.

o   One-third asked a driver to not use their smartphone while driving when riding as a passenger.

o   4-in-10 asked a passenger to operate their smartphone while they are driving.

You’re Never Alone on the Road:

AT&T launched IT CAN WAIT in 2010. Since then, many celebrities have joined the cause to deliver the message via TV ads, concerts, public appearances, Twitter and Facebook.

The company has also added a virtual reality experience component to the campaign to show the potentially deadly consequences of glancing at your smartphone while driving. You can download the free AT&T VR app and buy Google Cardboard at www.ItCanWait.com/VR to use with your smartphone to experience the IT CAN WAIT driving simulation.