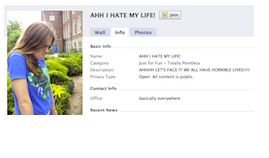 When we hear about the tragic suicide of a youth, many authorities, family members and friends will go straight to their Facebook page to see if there were any warning signs.

Is your teen acting withdrawn?  Secretive? Shutting down their screen as you walk by? Losing weight? Gaining weight? Changing friends?  Recent boyfriend break-up? Starting to fail in school when they always exceeded? Not working up to their academic potential? Dropping out of sports or other activities? Depressed?

Do you suspect they are being bullied or cyberbullied?

Especially with the holidays approaching, teenagers can feel blue just like some adults.  Know how your kids are feeling.

RED FLAGS and parenting.  Know them!

Facebook is the social hangout of the internet for all ages, but it is particularly true of teenagers.

Teenagers often are much more open about what they are thinking and feeling in this cyber environment than most older adults, though some parents are proving to be venting machines too. Since teens experience many emotional ups and downs, it can be easy to dismiss most of their dramatic postings as nothing more than normal teenage drama. However, there have been too many instances in recent years when parents had wished they’d paid more attention to what their teenager had posted as their ‘current status’.

Here a few status updates parents should watch for and investigate further.

Facebook status updates reach a lot of people, a parent of a teenager should definitely be one of those people who pays attention to what their child is broadcasting into cyberspace. It may be their way of trying to find out if anyone is really paying attention, and if anyone really cares.

Other articles for your consideration:

Social Climbing: What Teens Will Do To Climb the Social Media Ladder