Internet Trolls and Their Persona’s 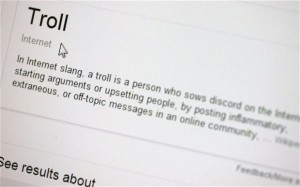 We have heard this over and over again.  It is a phrase that tells us not to engage with people online that are intentionally inflicting harm and cruelty towards others.

In today’s culture of digital cruelty, no one is immune to online harassment.  For years we have read about the research of youth and cyberbullying – finally in 2014 PEW Research Center revealed that 73% of adults have witnessed online harassment and 40% have been a victim of it.  These are not small numbers considering adults should know better.

So who are these trolls online?  The late John Dozier, co-author of Google Bomb, had given them excellent labels of what possibly motivated these cyber-animals.  He referred to them as ‘scofflaw personas‘.

This is the guy who used to wait on street corners for elderly ladies to pass. He enjoys attacking defenseless people and stealing covertly using deception. This type of blogger will steal your copyright protected content, have the search engines push your prospective clients to his site, and then run ads and otherwise direct the traffic to your competitors. He could be an affiliate marketer for a competitor getting a share of the revenue, or he could simply be running Google or Yahoo ads on his site. Pickpockets also take great pleasure in stealing your trademarks…surreptitiously using your mark in hidden tags, meta tags, hidden redirect pages, or through a myriad of search engine optimization techniques you can easily learn more about by looking online, all in the hopes of re-directing your prospects to a competitor and taking money from you.

We usually identify a wacko situation quickly. There are distinctive characteristics of his communications. The wacko is usually a “follower,” someone looking to gain attention and recognition, but escalates what may have started as fair criticism into more and more outrageous claims. Most sophisticated business people immediately view the poster as a “nut case,” particularly when an excessive amount of time or energy disproportionate to the merits of the subject is expended. But it is not easy for the typical browser on the web to see the pattern, usually spread over multiple web properties.

Or, maybe “liquid courage” would be more appropriate. This guy is exactly what comes to mind. During the day this blogger is a normal guy, but at night he returns to the sanctity of his home, gets drunk or high, and goes out on the web looking for “hook-ups” and blogging on his “hang-ups.” This guy is hard to detect as a fraudster, and sometimes won’t recall what he said online the next day while under the influence. He posts aggressive, false and arbitrary attacks on whatever issue of the day (or night) catches his fancy.

No, not from another world. But from overseas. In a far, far away place, without any treaty with the US, in a country without an effective legal system and no notion of business or personal property ownership rights. Many of these types operate out of certain Russian provinces, but the blogs, postings and communications appear to be from the customer down the street. This individual usually has an ulterior motive, often working with the criminal discussed below. He has no fear, until he takes a vacation to Turkey and US federal agents grab him for extradition, which is exactly what happened on a case in the not so distant past.

This is the guy who is scared to talk with a girl, but behind the keyboard, all alone, morphs into a Casanova. This empowerment of anonymity creates an omnipotent persona, and for the first time the nerd feels the effect of power and control, gets an adrenaline buzz when he exercises it, and he exercises it often, usually creating or perpetuating a volatile situation in which he feels he can outsmart the “opposition.” There is no principle involved. His blog postings are all about the adrenaline. It is hard to know if you are dealing with this type online…his posts are intelligent and on their face credible. But, once you identify the nerd blogger, he cowers and goes away, usually forever.

Enjoy debating a thirteen year old? They are out on the net acting like adults, posting statements and play-acting like a grown-up. The challenge, of course, is that most people reading the posts have no idea these are coming from a kid. The tip off can be the utter immaturity of the posts, but most often the kids can sound credible criticizing, for instance, a CPA’s method of calculating ROI for REIT holdings, because they can mimic earlier posts. There is no insidious motive here; just kids having fun as the hormones kick in. But the readers of the blog posting don’t know that.

This person attacks others, causes pain, and revels in the results in ways not worthy of mention. He loves to create, direct, control, and unleash a firestorm of criticism about you or your company just to create pain and damage. This type of person may often be the prime instigator of the online attacks, and tightens the noose by escalating the attack rapidly, almost as if in an obsessive state. You will find a sadist going to many sites and blogging, and he usually lets you know it was him because he uses his real moniker. He has characteristics of a stalker, and he is most likely to be the one that starts recommending direct physical violence against individuals. This person is not motivated by money, but by the pure enjoyment of pain being visited upon innocent parties.

No, not morally bankrupt. Actually bankrupt…no money, no assets, no prospects for work, and nothing to lose. These bloggers post without fear of the consequences or any regard for the truth because you “can’t get blood out of a turnip,” you “can’t get water from a rock,” and all these other sayings handed down, I surmise, through his generations. This is usually not a smart guy, but his postings are damaging and inflammatory. Many will own and control blogs without any concern about the consequences of liabilities that might arise through the perpetuation and “enhancement” of posts, and sometimes will post to their own blog and act like it was from a third party.

Career criminals, no less. Like the convicted felon running a sophisticated extortion scheme against a very prominent business. Or the owner of an open blog avoiding service of process with guard dogs protecting his compound. The thieves and crooks of the world are online today, and the criminals often have both an organization and a highly effective and surprisingly coordinated operational plan in place to target a business. Rumors of $500,000 a year payoffs seem to promote this problem, which emanates from more of a “mobosphere” (the mob effect arising from a blogger attack) than the blogosphere.

This person is in no manner a leader. This blogger has a hidden agenda, but he just makes it sound like he is a totally objective commentator. He can create an appearance of authority and the casual visitor to his blog does not question the legitimacy. This type of persona is hard to figure out. One of the most pervasive practices is to control a blog and allow negative posts against all except his generous advertisers. Another common technique involves omission; not disclosing conflicts of interest or the existence of a business or personal relationship because the readers of the blog will totally discount the commentator’s posts as unreliable and biased.

Learn more about online defamation and cyber-stalking from the entire Google Bomb book.