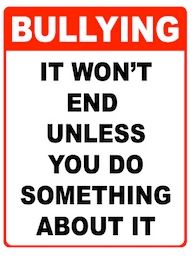 When we were growing up there were bullies. Nobody liked to be bullied, but it was a fact of life that you had to deal with kids that weren’t very nice. Now, schools are so anti-bullying that anything that even slightly seems like bullying is taken very seriously. At least when we were growing up they didn’t have Facebook to upload embarrassing videos to that would ruin a person’s life.

Check out my recent article on the best answer to cyberbullying!