Online Reputation and Your Life

How many people have cringed when they thought about someone searching them online?

We live in a time when your virtual reputation is literally your first impression many people will see.  Most know the old cliché about first impressions.  They only happen once.

The Internet can be unforgiving.  We live in a fast-paced world where very few people are taking the time to determine if it is Internet fact or Internet fiction.

My name is Sue Scheff.  I’m a nationally recognized author and Parent and Family Internet Safety Advocate.  I help parents and families that are searching for resources for their at-risk teenager.  After going through a difficult time with my own teen daughter, and being duped as my daughter was abused at a residential teen help program, I decided to created an organization to help other families so this didn’t happen to them. 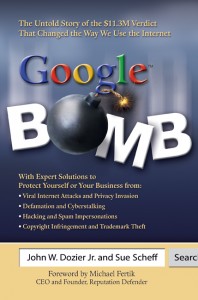 In 2003 you could Google me and the results would be frightening.  I was described with some horrific adjectives that would float straight to the first page of search engines.  It was what I called, my digital Scarlet Letter.

My book Google Bomb, co-authored with the late John Dozier, details many of the findings.

Who would do this to me or anyone?  Stalkers?  Crazy people?

As my story is told in Google Bomb, you find out that it is both. This is what people need to be careful of when they are in business or have a career today.  Whether you have disgruntled clients/customers or a troll that has decided they don’t like you, you can suddenly become a tarnished cyber-soul and lose all footing online.

Your current BFF could become a foe.  Your spouse become an ex.  Your business partner today could be history tomorrow.

Fact is, nothing is sacred anymore and the word privacy will be listed under extinct shortly.  The Internet is not always a factual source of information.  It does make mistakes.

I was a lucky one.  I was able to hire an attorney, determine who was defaming me online, sue them,  and win a landmark case for Internet defamation and invasion of privacy.  In those days, many people didn’t hide behind anonymous – they believed that the First Amendment would condone this type of defamation – it doesn’t.

Although I won the landmark case, it didn’t remove the slanderous and defamatory comments that were online.  As many of you know, the Internet is also one of the largest tattooing machines.  I was left scarred both virtually and emotionally.   My vindication, though I was thrilled with the jurors verdict, was short lived when I realized that I still had to overcome the cyber-trash.

When I first spoke with Michael, I wasn’t sure what I was getting into.  The one thing I knew for sure, Michael and his handful of employees were confident they could help me.

If you have become a victim of Internet defamation or slander, you probably know how you can become paralyzed in fear.  You don’t Google yourself, you literally have become an emotional recluse – and can barely function.  I have tons of emails from victims of Internet slander, they tell me these exact same feelings of hopelessness and helplessness.

Michael and his team got to work.  Shockingly what I didn’t realize is it isn’t about removing the cyber-trash, it is about telling cyberspace about who I am!  Wow!  Before I knew it, they had created a safe space for me.  It wasn’t perfect, but life isn’t perfect.  Cyber-life will probably never be perfect either.

What I want people to understand is, we can get so caught up in the trash, the lies (twisted truths) that we forget that we are a human and we have done so much good with our lives.  We had a vibrant and prosperous life before we were violently attacked by keystrokes and a mouse-pad.

I am sharing this now because I am still contacted on a daily basis from so many people that are in the same place I was in 2003.  Barely hanging on because of Internet slim.  I want to give everyone some words of advice and encouragement.  Before you get to the place I was at in 2003, start building your online profile today.  Don’t be shy about yourself, showcase your attributes!

The fact that so many online reputation management and digital branding companies are now ‘at your service’ is a sign of the times. The rise of incivility along with the reality that there power of the keypad to destroy a business or career is being taken very seriously.

The other option is social media assistants also known as virtual assistants who are able to help you build your image and network of followers.

Back in 2006 options were limited as far as social media.  Today you have a resources galore!  Use them to your advantage.  Not everyone needs an online reputation service today – some can usually have their own social marketing in-house person or maintain it themselves since there are so many platforms now.

Your virtual reputation is a part of your life that will always be a part of you.  It is a simple fact of life.   There will always be some negative out there, and I understand that.  It is not about having a perfect life, but giving people a balanced view.

Like it or not, your cyber-life is here to stay!

Because social media is evolving everyday,  I can actually say – Go ahead, Google me…….

My latest book, Shame Nation: The Global Epidemic of Online Hate (Sourcebooks 2017) by Sue Scheff with a featured foreword by Monica Lewinsky.