Power of Pledges: Put A Stop to Distracted Driving 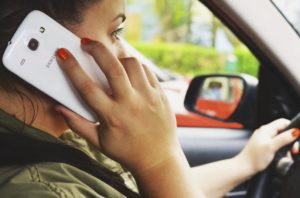 Distracted driving is NEVER OK. You’re never alone on the road, even when you’re alone in your car. That’s the simple message behind AT&T’s IT CAN WAIT campaign against distracted driving. Research by AT&T shows smartphone distractions behind the wheel have grown beyond texting to social media, web surfing, selfies, and video chatting. With this being Distracted Driving Awareness Month, AT&T is urging drivers to take the IT CAN WAIT pledge — and research has shown the power of the pledge matters.

Here is what AT&T has learned through its research:

Power of a Pledge:

o   4-in-10 asked a friend or family member to not use their smartphone while driving.

o   One-third asked a driver to not use their smartphone while driving when riding as a passenger.

o   4-in-10 asked a passenger to operate their smartphone while they are driving.

You’re Never Alone on the Road:

Smartphone activities people do while driving: 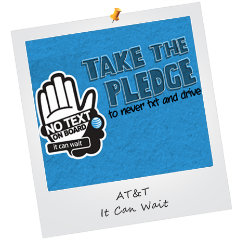 AT&T launched IT CAN WAIT in 2010. Since then, more than 23 million people have taken the IT CAN WAIT pledge.

AT&T has also added a virtual reality experience component to the campaign to show the potentially deadly consequences of glancing at your smartphone while driving. You can download the free AT&T VR app and buy Google Cardboard at www.ItCanWait.com/VR to use with your smartphone to experience the IT CAN WAIT driving simulation.

Don’t forget to Tweet this!  Use hashtags: #ItCanWait, #StopDD and #EndDD

You may be saving a life – including your own.