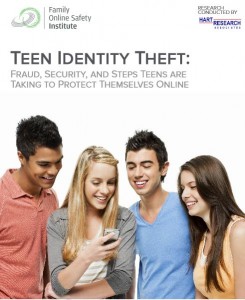 The Family Online Safety Institute (FOSI) recently released a new report that was conducted by Hart Research Associates and supported by Google and Symantec.   Their study was about young people  that are increasingly concerned about the privacy of their personal information online and how their identities can be stolen through their use of social media.

It is exciting to see that kids, especially teens,  taking their digital keystrokes and cyberspace seriously.  If you recall the PEW Study last May, teens were reported to be taking their online reputation seriously now also.

Back to the recent findings that FOSI released on November, 6th, 2013.  This is very important since it has been reported that identity thieves will target kids since they usually don’t find out their identity has been comprised until they are applying for student loans or credit credits.  With this in mind they also have usually have clean credit and can be very easy targets.

In the findings, 76% of teens are very or somewhat concerned about their personal information being harmed by their online activity.

We do have 51% of teens in this study that are very concerned about someone stealing their identity, and this is up from a year ago when it was at 43% of teens.  Concern has increased across the board, but a larger margin among girls.

34% (1 out of 3) teens have shared their passwords with people other then their parent or guardian.

69%  have set up one or more devices to auto-lock so that a password or PIN is required to access the device.

What I found the most amazing was the fact the teens wanted to hear from us!

Despite being incredibly plugged in to newer online platforms, teens indicated that more “traditional” forms of outreach are the best way to get their attention about the risks of online identity.

When asked which one or two of six method would be the most likely to get their attention, their top choices are:

These more traditional forms of outreach rank higher than approaches that use social media or social networking sites.

So parents and advocates, you matter!