Teens and Social Media: What Are Their Thought’s Today? 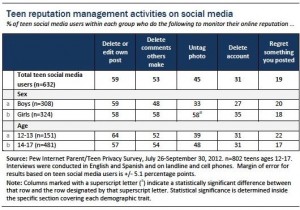 With the recent PEW Internet Survey released on May 21st, 2013, there were some new findings that should make parents happy and maybe not so thrilled at the same time.

We found out that some teens are finally waking-up to the fact that their online reputation is critical to their future.  Another words, they are thinking twice before actually posting a picture or a debatable comment.

Here are some more key findings from the survey:

Teens are sharing more information about themselves on their social media profiles than they did when we last surveyed in 2006:

60% of teen Facebook users set their Facebook profiles to private (friends only), and most report high levels of confidence in their ability to manage their settings.

What parents need to remember is that they also need to step up and become educated with cyber-life and social medias — including privacy and security issues as they concern social networking.

It is worth the time to read the entire PEW Research Survey, especially the Focus Groups with the teens.  You will find they are keenly aware of the adults that are watching them, which is a major improvement from years ago.