The Growing Problem of Online Incivility

New survey by Weber Shandwick, Civility in America 2018, revealed that the majority of us (84 percent) have faced incivility. 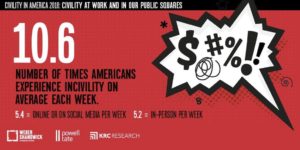 According to this survey, 56 percent of those who say civility is worsening blame the Internet and social media. However the number one reason Americans point to the rise in this shame nation is the president of the United States at 58 percent.

Civility in the workplace

The positive side is that workplace, largely continues to be a safe zone for many coworkers. More than nine in 10 Americans who work with others (92 percent) describe their place of employment as very or somewhat civil, a statistic that rose since our last measurement at the end of 2016 (86 percent).

Not only does the overwhelming majority of Americans with coworkers describe
their workplace as civil, but 27 percent report this level of civility has improved compared to a few years ago. These positive indicators align with the general decline in the
number of Americans overall who report ever having experienced incivility at work.

It starts at the top

When leadership is civil, these numbers further improve. Employees who work in civil places and think their leadership is civil feel safer reporting incivility or harassment to their supervisor (48 percent) and are less likely to distrust management to handle complaints about incivility (6 percent). There is a clear need for civility to start at the top of an organization.

What can be contributing to the increase in civility in the workplace that people can learn from?

Being aware of what topics are not for discussion (or are sensitive) in a workplace environment to keep a healthy and safe climate. This is something that the online world could learn from. There’s nothing wrong with having constructive conversations, however we understand that sometimes people are not able to handle their emotions — especially when there is a screen between them, and tempers can flare through a keypad. 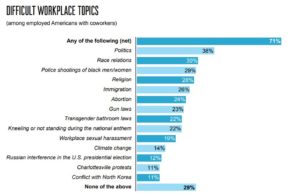 We’re all entitled to our opinions, however it’s how you present them that could be considered civil or inappropriate.

Who are the role models?

It’s hard to ignore the incredible levels of incivility coming from the leader of the land, as well as people that are ready to aim and shame their smartphones at civilians without any thought of the consequences of how it can impact someone’s life.

It’s time for all Americans to take back this shame nation and build a civil one. You don’t have to be a celebrity to have a voice or build a platform of kindness and compassion in your home or community.

5 ways anyone can be an upstander:

3. Reach out to someone that is struggling. Private message them, even if it’s only a virtual hug. Let them know you are there for them.

4. Kindness is contagious. Talk about it with your kids. Read headlines of people doing good things for other people — then get involved.

5. Lead by example not only for your children, but for your colleagues, friends, and family.