On March 9, 2016 a new series started, The Internet Ruined My Life on the Syfy Network. Though the series is new, we know that keystrokes and cyber-wars have been destroying lives for a long time.

“I wish I had never hit send.”

“I never knew one Tweet would ruin my life.”

“Everyone wants to be Internet famous.”

Do they? Well, not in the way these stories happened. Have you ever considered what would happen if you become a #hashtag? And I don’t mean a positive one. We have seen many people become victims of viral vomit that have innocently posted something benign that was completely taken out of context.

We have seen others that have posted things on what they believed were private forums or groups, or  to their limited number of friends or followers — only to have them republished by that one friend that maybe wasn’t really a friend at all.

As a viewer, you watch these cyber-disasters and simply can’t believe they can actually ever happen to you. However as someone that has been through digital warfare, I know firsthand, no one is immune to online attacks.

No one is immune to suddenly becoming a victim of cyberbullying or stalking. You never know when a friend can turn on you — or if you have a disgruntled client or even an angry business partner. Maybe you have a competitor that is jealous of you. We are watching more and more people using their finger-tips for e-venge now.

The keyboard has now become a legal lethal weapon that is not only destroying and ruining lives, it’s also taking lives.

We have read the devastating headlines of youth that have committed suicide over cyberbullying. We have also read where teens and tweens can become so involved in the video games it’s hard to define reality from fantasy. 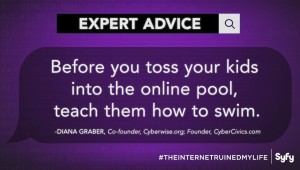 Most babies learn to crawl before they walk. With today’s tech world, we need to teach our children digital etiquette before we hand them a keypad of any sorts.

It seems children today are more cyber-savvy than most parents, yet aren’t mature enough (or have common sense) to understand the consequences of adult situations – such as sexting.

Sexting is considered today’s new flirting for youth. However what most are not comprehending is the seriousness of it.

These are only a few of the topics that the great team of Cyberwise with special experts each week, will be discussing and offering takeaways.

Everyone is invited! Each week we will have new experts joining us. Diana Graber will host and I will be joining her most of the weeks.

Starting March 17th the experts were:
Bradley Shear is a lawyer who focuses on Internet, Technology, and Privacy Law. His advocacy efforts have led to at least 23 states banning employers and/or schools from being able to ask for access to your personal social media accounts.  He blogs at www.shearsocialmedia.com.

Dr. Pamela Rutledge  is a Media Psychologist who tries to answer those questions by combining an understanding of human behavior, cognition, and emotions with an equal understanding of media technologies. http://www.pamelarutledge.com/

Richard Guerry – is the founder of the non-profit organization the Institute for Responsible Online and Cell-Phone Communication (IROC2). Public and Permanent is how you can prevent any digital issue beyond sexting and cyber bullying.

Emily Lindin – is the founder of The UnSlut Project, author of the newly released memoir, UnSlut and UnSlut Documentary.

Andrea Weckerle – is the Founder of CiviliNation and the author of Civility in the Digital Age: How Companies and People Can Triumph over Haters, Trolls, Bullies and Other Jerks (2013).

Dr. Michelle Drouin is a developmental psychologist. Dr. Drouin’s  research on sexting, social media, and mobile phone addiction has attracted international attention, and she regularly does interviews for television, radio, newspapers, and magazines.