November 13, 2017 is World Kindness Day which is a great time to emphasize the importance of humanity towards each other. At the same time, it’s a bit sad that we have to remind people to simply be nice to one another.

In my book, Shame Nation: The Global Epidemic of Online Hate we recognize that although we are living in a time of incivility both offline and especially online, it’s important to give you resources of people that are making a positive impact on communities all over the globe. 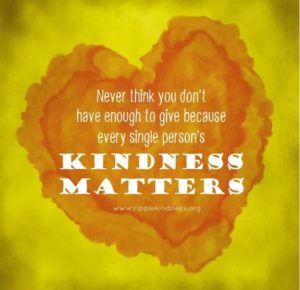 Founder Lisa Currie developed this Australian-based curriculum for the very youngest of students in elementary schools. “From what I could see, traditional antibullying programs were very negative and short-lived and really didn’t leave kids with any resources for improving their thoughts, feelings, or behavior,” she says. “Our aim is to infuse children with goodness by teaching them about their emotions, having them participate in acts of kindness, and experiencing the good feelings that are produced when they do good for others. When children learn to be givers, their whole world can change.”

Here are some of Ripple Kindness’s suggested activities to
get you started:

• Give blood.
• Leave a chocolate for the cashier.
• Bake a cake for someone.
• Feed an expired parking meter.
• Pay for someone’s meal.
• Give a compliment.
• Listen to and play with children.
• Clean someone’s home.
• Clean someone’s car.
• Buy coffee for the person behind you.
• Visit someone in a nursing home.
• Take some food or clothing to a homeless person.
• Leave a note in a lunch box.
• Don’t charge someone for some work you do for them.
• Become an organ donor.
• Ask an elderly neighbor if she needs any assistance
around her home.
• Hand make cheer-up
cards and deliver them to a hospital
for patients.
• Let someone go in front of you at a checkout.
• Babysit for someone.
• If you’re an employer, allow your staff to leave an hour
early one day. 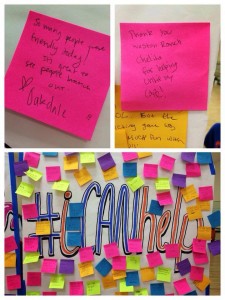 I Can Help Delete Negatively

At Excelsior Middle School in Byron, California, a fake Facebook page was created to poke fun at a teacher. Leadership teachers Matt Soeth and Kim Karr were inspired to create a program called #ICANHELP, empowering their middle school students to choose a different path and “delete negativity.” They call themselves the Positive Warriors. When, a year later, a similar page went up on Instagram mocking the same teacher, thirty kids
went in, posted supportive comments, and reported the page, which was removed within forty-five minutes.

This crusade is spreading. #ICANHELP visited more than one hundred schools across the country, hosting assemblies and organizing student leadership trainings. “I don’t tell kids what not to do, I show them what I want them to do,” Soeth says. “Modeling that expectation will breed that behavior.” One popular exercise that Soeth brings to schools is “Give a Compliment, Get a Compliment,” where students scrawl personal messages for friends on Post-it notes, filling up entire bathroom mirrors with notes like “You’re amazing,” “Smile!,” and “You’re the best version of you!” Another is “High-Five Highway,” where high school upperclassmen and staff line the halls on the first day of school, and instead of hazing new freshmen, greet them with high fives. The most popular of all is “UnSent”—if you’ve ever wanted to thank someone for something they did, but fretted that too much time had passed, UnSent Day gives you the chance to still send
that missive long past its due.

“If there’s negativity online, there’s going to be negativity within the culture off the campus,” says Soeth. “We try to work with students to [help them] understand how powerful they are, in order to make good things happen.”

“Who is the most awesome person today?” asks the Facebook page “Greenwich Compliments.” And every day, it answers, peppering those who live in this posh Connecticut town with a daily hip-hip-hooray for their beautiful voice, sense of style, or willingness to lend a hand.

The idea was sparked after a 2013 suicide of a bullied teen on his first day of his sophomore year shook the entire community. Looking for a way to turn things around, the Facebook page solicits compliments about Greenwich residents, receiving up to thirty submissions daily. “It only takes a few seconds, but by submitting, you are making a conscious decision to make someone else’s day better,” says the woman behind the site, a Greenwich High School graduate who chooses to remain anonymous. “People ask if I am a police officer or a teacher. I am neither. I am just a person who grew up in Greenwich and who knows how tough life can be sometimes and who knows how awesome it is to receive a compliment and how rewarding it is to give one.”

“Privacy and anonymity are very frequently used negatively on the Internet, unfortunately,” she explains. “I like to think that Greenwich Compliments is different.”

These types of #NiceItForward accounts have popped up across the nation, some created by students themselves and others by adults. One Twitter account, @OsseoNiceThings, was created in 2012 by Kevin Curwick, then a popular high school senior at Minnesota’s Osseo High School, who began anonymously tweeting shout-outs to his classmates. The media attention sparked similar accounts all over the state and beyond, such as @ERHSnicewords, created by a student at East Ridge High School in Woodbury, Minnesota, and titled “The End to Bullying,” which now has more than forty thousand followers.

Down in Charlotte, North Carolina, one father of two had had enough with comments on Twitter bashing a sports media star he follows, so he decided to create the moniker Supportive Guy and put positivity out there. “I wondered what the counterpoint of this kind of online behavior would be,” he explains. “And I created the account [@SupportiveDude] that moment on a whim.” Since then, he has grown his following to more than fifteen hundred fans, tweeting kind remarks, and has even started the SupportiveGuy minute-long podcast. “All I’m trying to do is give people a safe haven and an online friend they can always tweet and get a response [from], maybe even a laugh. And maybe, people can see that you can get attention online without being negative. The reality is that you have a right to be on social media whenever you want to, without [the] risk of being verbally attacked.”

For more of these inspiring stories, organizations and people making a difference, order Shame Nation book today from your favorite bookstore.