Is it Rude, Is it Mean or Is it Bullying? 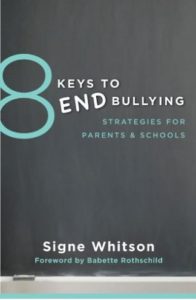 We often are confused between the definitions of rude, mean or if it’s bullying behavior.

Signe Whitson, an internationally recognized speaker and educator, provides insights on the distinctions of these types of behaviors in her latest activity books.

Rude behaviors are usually thoughtless and ill mannered, but not meant to actually hurt someone else.

Mean = Saying or doing something to hurt a person on purpose, once or maybe twice.

The main difference between “rude” and “mean” behavior is that rudeness is usually unplanned.  Mean behavior, on the other hand, is done on purpose.

Make no mistake; mean behaviors are very hurtful and should be avoided at all times! Still, meanness is different from bullying in important ways that we’ll talk about next.

Bullying = Cruel behavior, done on purpose and repeated over time, that involves an imbalance of power.

Kids who bully say or do something purposefully hurtful to others and they keep doing it again and again, with no sense of guilt or shame.  Kids who bully have more power than the kids they pick on.  This power may come from being older, stronger, or bigger in size or it may come from getting several kids to gang up on one target, to make that target feel hurt and alone.

Order The 8 Keys to End Bullying Activity Book for Kids and Tweens on Amazon.