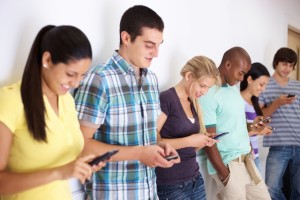 Everyone loves their cell phones and most can’t live without them.

PEW Fact Tank shares that 64% of adults in 2015 own a smartphone, but when it comes to cell phones in general, it jumps to 90% of adults.

Like with the sex talk that our parents had with us (well, most parents had with their kids), having a tech talk is just as imperative for this generation – but with a huge difference. The tech talk has to be a regular discussion, if not daily. It should be as common as asking your child how their day at school was.

We continually drive home the message with our teens not to text and drive. We show them how distracted driving kills the same as drunk driving. Now we also have to be sure we are discussing how the other ‘exting’ —- sexting that could potentially ruin your/their life too.

The concern over sexting for all ages is very serious and has serious consequences.

No one, at any age, is immune to the consequences of sexting. If your significant other suddenly has turned into your foe, you need to be very cautious of what you may have sent them and how they will use it.

Now to our youth.

The recent sexting scandals in high schools among teenagers has become a wake-up call for many parents and students. Parents that don’t want to believe their child would engage in this behavior, and students that don’t understand that what they are doing could potentially land them in major trouble.

In a study by Drexel University in June 2014, the majority of teens were not aware of the severity of the consequences of sexting.

Having knowledge is power.

This goes back to our offline parenting skills helping your teen make better online decisions. Like the texting and driving lecture — sexting needs to be discussed frequently. With the current headlines of teens hiding nude phones in apps, the ghost apps and other ways that kids are finding ways to discretely send sexual notes, it’s imperative you step-up your digital parenting skills and become just as creative as these apps!

We have the knowledge of these apps now, you have read many articles about how to search your child’s smartphone for them.  One of the best was by Dan Tynan on Yahoo Parenting. Read it – and educate yourself on finding those sneaky apps.

Most importantly, does your teen understand what sexting is – and do they know the consequences?  Start the sext chat early.

Cyberbullying Research Center lists the sexting laws by state.  Find your state and become aware of the legal ramifications. However, keep in mind, if you don’t have any state law yet, it doesn’t mean it couldn’t change. Also, just because it isn’t law in your state – doesn’t mean it’s acceptable. Especially if it crosses state lines electronically – and remember, your online reputation matters.

Now find new ways to chat with your teen about their digital lives — not only offline, but let’s go online too – together!

Back to basics of cell phone manners.

Before texting (and the dangers of sexting), is your teen using cell phone etiquette? 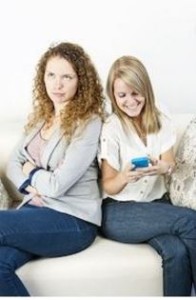 Turn off your phone when you’re having a face to face conversation with someone. The increased use of cell phones, tablets and laptops has taken a toll on personal communication skills. Many teens have a hard time putting their phones down and engaging in a real and sustained conversation with another person. It’s become harder and harder for parents, teachers, coaches and others to connect with teens in meaningful ways, and when they are able to it’s often cut short by technology. While being able to answer the phone every time someone calls is convenient, interrupting a face to face conversation for a phone chat is disrespectful.

Teach your teen to turn off his phone or set it to vibrate (and then ignore it!) when he’s involved in a face to face conversation. Help him understand that by giving someone his full attention, he’s sending the message that he genuinely cares about what the other person is saying. Imagine how great it would be to enjoy dinner with your teen without his phone ringing, beeping or vibrating every few minutes.

Remember that basic phone rules still apply. Although your teen will know most of the people calling him, he will still need to know how to correctly answer a phone call meant for another. Remind him to speak clearly, ask if he can take a message, repeat the message back to the caller and use “please” and “thank you.” As a follow up, he should get the message to the intended party as soon as possible.

Keep the volume down when in a public place. There are few things more annoying than someone loudly chatting away on a cell phone right next to you. Remind your teen that when he’s in a public place like a restaurant or movie theater, he’s sharing that space with a bunch of people who aren’t interested in his conversation. He should keep his voice lowered and step away from the crowd to talk. Some may still be able to hear him, but his phone conversation will be much less intrusive to others.

Keep it G rated. Teens often try out a wide variety of curse words and crude statements as they find their “voice.” Although it’s a natural part of the teen years, that doesn’t mean others should have to endure it. Let him know it’s unacceptable to use that type of language in any public conversation, especially if children or young adults are around.