Who Are Your Friends? Would You Miss Them? 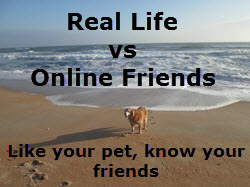 As you get older, you soon realize that it is not the quantity of friends you have, it is the quality of them.

You learn to separate your acquaintances from your good friends, and your childhood friends from your current friends.

We also learn, as adults, that our friends can be a reflection of who we are.  Teens and kids, on the other hand, haven’t matured enough to understand this – and will easily gravitate to less than desirable peer groups to fit-in to what they believe is a cool-clique.  This can drive parents crazy!

The incident of Skylar Neese should be a wake-up call for teenagers across the nation.  But did it take it to the extreme?  Sadly as I watched it unravel on Dateline last night, it ends with young teens saying they don’t know if they will ever be able to trust any friends again.  We have to believe that kids are resilient and will hopefully come to realize that the two murders (teenager girls that claimed to be Skylar’s best friends) were also completely sick-minded.

We can only pray that this is an isolated incident — and this type of hated, rage and violence is not a common form of behavior among best friends.  (Watch the video below).

This past week another story surfaced of a mother in Utah that decided her young daughter needed to better understand the risks of cyberspace – and who and what so-called friends can really be.  In her online experiment, using Facebook, she established a phony profile of a 20-year-old female Utah college student named McKenzie. She wanted to show her daughter what could happen when strangers try to become friends through social media.

Before long, the profile had amassed a flood of Facebook friends — 800 in a matter of a few weeks — many of whom claimed to live in Utah. There were children, women and men clamoring to communicate with a completely fake person. “My name is prince charming, “one man said. “Hey Mckenzie you’re gorgeous,” said another. Another messenger said, “Hey, you look familiar.”

At the same time the comments were becoming inappropriate to the point where the mother couldn’t allow her daughter to read them.

Summer is here and it is a perfect time for parents to sit down and discuss friendships with their kids.  Both in real life and their digital life.

Tell them it is time to clean out their social networking sites of friends they don’t know.

Also people that don’t contribute positive content or are always posting things that may make them uncomfortable.

Especially teens that will be applying to colleges and employment, your digital image is your future.  It is a fact, your name will go through the Internet wash-cycle and how it spins out will most likely determine if you land a job or secure a spot at a college of your choice.

Summertime is more screen time.  Facebook, Twitter, and Instagram are full of people that you probably won’t miss.  Unfriending is really painless.  www.JustUnfollow.com on Twitter will let you know who isn’t following you back – or even inactive followers.  That is a great start.

Safety is a priority.  For you and your friends and family.