Digital Parenting in the High-Tech Age 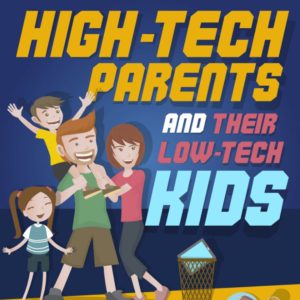 Year after year, we watch as media consumption rises — in our homes, our professional workspaces, and even while we’re out and about. According to Nielsen’s Total Audience Report from the first quarter of 2016, our consumption of media has increased by a whole hour since the same time period in 2015.

The reason for this is obvious. With greater technology adoption comes more avenues through which we have access to media.

It’s not surprising then that the American Academy of Pediatrics (AAP) compiled a thorough analysis this October on the effects of media on children. In addition, they included a revision to their recommended usage guidelines along with the report.

In sum, the AAP expects parents, educators, and physicians to work with children in maintaining a “healthy media diet” based on the following breakdown:

The AAP’s recommended healthy media diet isn’t groundbreaking news. As children become exposed to more media and have greater access to technology, this question “Should there be limitations?” comes up frequently. What’s interesting to note, however, is the correlation between what the AAP now recommends with what the tech elite already do with their own children.

High-Tech Parents and Their Low-Tech Kids

New technologies present parents with unique challenges. Smartphones and tablets have become an easy babysitter for many stressed out parents. But that’s not usually the best thing for the children. Here we will look at how the world’s leading tech execs — people whose lives revolve around these gadgets — deal with these problems.

How the Tech Elite Do It

Every parent needs to decide what works for their children, here are some options:

Though high tech is marketed as a boon for the world, the tech elites who create it also have a good understanding of its dangers. It might be convenient to hand an iPad to a squirming toddler. But it is usually better to follow the lead of these tech elites and manage the situation in a more old fashioned way. Sources: parenting.com, edudemic.com, techaddiction.ca, nytimes.com, breitbart.com, thewire.com, reuters.com, webmd.com, mashable.com