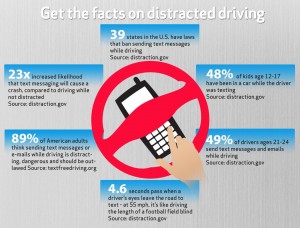 Summer is coming and it starts with Memorial weekend.

AT&T, which has already reached millions of people through its  “It Can Wait” campaign, announced recently that Verizon Wireless, Sprint, T-Mobile and 200+ organizations are joining the movement to end texting while driving, a habit involved in more than 100,000 car accidents a year (National Safety Council) and makes drivers 23 times more likely to be involved in a wreck (source: Va. Tech). The “It Can Wait” campaign culminates in a national day of action on September 19th, encouraging everyone to get out in their community and advocate involvement on behalf of the movement.

The summer-long initiative kicks off on May 20th and will be supported by a new national advertising campaign featuring people who are living with the consequences of texting while driving, a large-scale nationwide texting-while-driving simulator tour, major retail presence in tens of thousands of stores, and more. The campaign, aimed at educating drivers to change behaviors that will ultimately help save lives, will run between Memorial Day and Labor Day, deemed by AAA as the “100 Deadliest Days” for teen drivers.  Furthermore, according to this recent study, texting-while-driving is now the leading cause of death for teen drivers, surpassing the number of teen deaths related to driving under the influence.

Through the “It Can Wait” movement, more than 1.5 million pledges to never text and drive have been made and thousands of people have had hands-on experience with driving simulators that make clear the dangers of texting while driving. Head to att.com/itcanwait to use an online simulator, hear stories from victims of texting while driving, view a riveting documentary “The Last Text,” and find information on AT&T’s DriveMode app for Android and BlackBerry phones that can automatically disable texting when the phone is traveling more than 25 miles an hour in a vehicle.

o   Six in 10 commuters said they never texted while driving three years ago.

o   49 percent of commuters self-report texting while driving, compared to 43 percent of teens.

o   More than 40 percent of those who admitted to texting while driving called it a habit.

Be an educated parent, you will have safer teens.