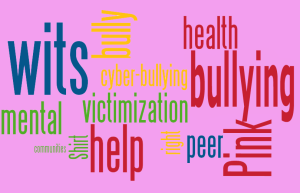 February 25 is national Pink Shirt Day. The national observance came about as the result of a teenage boy who was bullied when he wore a pink shirt to school. The next day, dozens of the teen’s classmates, in a show of opposition to bullying, all wore pink shirts to school.

According to the U.S. Department of Health and Human Services (DHHS), 1 in 3 students say they have been bullied at school. The 2013 Youth Risk Behavior Surveillance Survey found that nationwide, 19 percent of students had been bullied on school property during the 12 months before the survey, while nearly 15 percent had been bullied electronically in that same time period.

While face-to-face bullying is still common, cyber-bullying – bullying via email, text messages, instant messaging, chat rooms, social media sites, videos, and pictures – is on the rise, according to BullyStatistics.org. With most kids today carrying a mobile device, kids who are cyberbullied have a harder time getting away from the behavior because:

In recognition of Pink Shirt Day, AT&T has compiled a list of apps, tips and tools to help parents protect their kids from bullying.