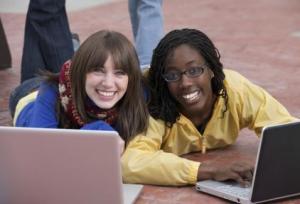 October is National Cyber Safety Awareness Month which spotlights an array of digital security measures parents, teens, and everyone should be using and should be aware of to protect themselves virtually.

It is not only about protecting yourself from the cyber-scams such as identity theft and Internet predators, it can be as simple as learning how to use your keystrokes with respect as they do reflect your future.

Online reputation management (ORM), when we initially heard about it back in 2006, was mainly a concern for professionals, business owners and potential job seekers. Today, ORM, is a concern from the moment your child is handed a keypad.

Every keystroke counts. It is that simple.

Today teens are becoming more keenly aware of their digital reputation. In the most recent PEW Internet study 57% of teens say they have decided not to post something online because they were concerned it would reflect badly on them in the future.

As college admissions as well as employers are growing in numbers in admitting that they will use an Internet search on their applicants, it has become critical that your online resume needs to be maintained and one you can be proud of.

What is a mentor?

Being a cyber-mentor is not to be taken lightly. Parents today should be their child’s role model, both online and off, but we also know that kids like to reach out to their peers.

What are the other kids doing online, and is it appropriate/safe?

Today it is important to talk to our kids about being a social media role model (cyber-mentor) themselves. Let them know that others are watching them, and that you the parent are there for them if anything comes up.

We should advise them to always be aware that their posts, comments, photo’s and chatter are imprints that should lift up others. One thing you should always think about before posting: Will this post (in some way) positively impact someone else? If not, maybe it’s something you shouldn’t post.

Being a cyber-mentor also can help others when dealing with cyberbullies.

While there are many reports of cyberbullying swirling in the news, there are also many stories of kids stepping up to the plate to discourage cyberbullying. Kids have a lot of power in thinking something is cool or uncool. With that, there are many instances kids share of banning together to stop the cyberbullying they observe. Making comments to the perpetrator, or posting positive comments to offset and dissuade the negativity is a very effective tool kids are using to shut down cyberbullies.

We know how impactful kids can be when they’re in groups, how impressionable they are, and how kids can be easily influenced by others; often times, this is seen as a negative thing, but it can also be largely positive. Banning together to be cyber-mentors, kids can take their power of one and make it into a very powerful, positive force when it comes to online activities.

For instance, an Iowa City teenager and his friends started a Twitter feed with the intention of stopping cyberbullies in their tracks. The West High Bros (@westhighbros) send out wonderfully random, positive tweets to their classmates daily, and have made quite an impact – with over 5,000 followers and over 2,000 positive Tweets.

Like any other behavior with kids, there are certainly some risks and negative things that can happen. However, the power of positivity – especially when the kids themselves perpetrate it, can be far more powerful than the negative instances we’re hear a lot about. When it comes to online activities, it starts with parents being positive role models for their kids, encouraging positive and responsible behavior.

In empowering our children to make positive decisions when it comes to their digital lives, the banned power of good can not only influence other kids, but can also be a very positive deterrent for negative behavior.

Being a cyber-mentor is easy and effective, and can help make our kids’ (and those around them) online experiences positive ones.

Katie L. Greer Bio: Former Director of Internet Safety for the Massachusetts Attorney General’s Office and Intelligence Analyst for the Massachusetts State Police, Katie LeClerc Greer travels the country educating students, parents, administrators and law enforcement officers about technology and digital responsibility/safety. Katie was recently named as an advisory board member for iKeepSafe, and serves as an industry expert and advisor for various government and private agencies around the country.  You can learn more about Katie at: www.klgreer.com Follow her on Twitter @KatieLGreer