Is Your Child Ready for a Cell Phone? 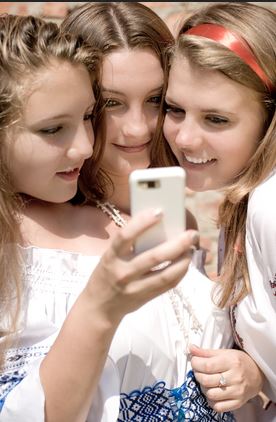 How do parents today determine when it’s appropriate to get their kids a cell phone?

Parents should begin by having an ongoing dialogue with their children about the role technology will play in their lives. How will a mobile device be used? How will the child show responsibility for it? Who’s going to pay for it? These are some of the larger concerns families are dealing with in the present deluge of digital devices. When your children seem to understand these concerns, then it might be a good time to buy their first cell phone.

What’s the Rest of the Country Doing?

The general consensus among experts is that sometime around middle school is when it becomes practical and acceptable for kids to get their own phone. The median age for kids to get a cell phone is 12, according to youth market research group Youthbeat; however, one in 10 children between the ages of six and 10 already has one.

Before middle school, most kids probably aren’t responsible enough to handle their very own phone. Once kids become more involved in school activities and spend significant chunks of time away from their parents, it’s probably a good idea to look into getting them a cell phone so they can communicate with you. Know, though, that they will use it as a mechanism to express their individuality.

Prepaid cell phones give the parent control, while granting the child the responsibility and privilege of having a cell phone. According to Nielson, teens send more than 3,500 texts per month and access vast amounts of data. By giving your child a prepaid phone, you can control how much data they can access (in other words, how much time they can spend on the Web) and how many texts they can send each month (one text equals one minute). This helps your child learn how to be accountable and responsible.

There are other reasons why cheap cell phone plans would be a good fit for your child and budget. Many mobile network providers have prepaid phones that offer Web cam capability, unlimited text messaging, Web access and more, so if that’s something you want your child to have, it’s out there for fairly cheap. Another big draw is the lack of commitment involved; you’re not locked into a phone contract, which makes good sense, since a needs differ with age. It’s pretty easy to find something that will fit for most situation.

Another concern with kids having access to cell phones is the radiation that’s emitted from mobile devices. Time.com’s family writer Bonnie Rochman writes that she has her kids keep a pillow between their laps and the electronic devices they are using as well as having them use speakerphone for calls to keep the phone away from their heads.

The jury is still out about the effects of cell phone radiation, and progress on addressing this concern is slow. In July 2012, the American Academy of Pediatrics sent a letter to the Federal Communications Commission, urging the commission to review its radiation standards. The current rules regulating wireless devices were drawn up in 1996, when there were only 38 million phone subscriptions in the U.S.

However, due to education budget constraints, teachers often rely on students to bring their own devices to class, and it’s not unrealistic for high school staff to assume students have access to smartphones. Many homework assignments and outside projects can be more easily accomplished by using Web-based phones.

There is no hard-and-fast rule about what age kids can handle the responsibility of cell phone. Ultimately, it’s a call you have to make. As you continue this discussion with your child, it’s vital you set clear ground rules beforehand. Some things to consider: