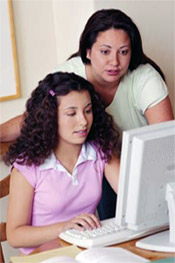 With all the joys of parenting, there are also a few things that may not be as enjoyable – one being THE talk. I think there are many factors that make it daunting; when do we have THE talk? Where do we begin? My Dad never had the talk with me, but I can tell you as a fairly new mom with two very little children, I started the minute my first born (who just turned two) showed interest.

No, no, no…not THAT talk. The tech talk. From my personal experience, I can tell you that not talking about responsible behaviors when it comes to technology can make it very dangerous. As a 13-year-old, the family I used to babysit for gave me unlimited access to AOL (Instant Messaging, chat rooms, and email at the time). I ended up befriending a complete stranger in a chat room who told me that my blonde hair and blue eyes sounded beautiful; to a 13-year-old in that awkward stage, it was wonderfully flattering attention.

I talked to him faithfully every Friday night I babysat, looked forward to it and even invited him to come and meet me and my family. The family I babysat for ended up moving away, so I no longer had AOL access as my Dad didn’t have it at his house. It wasn’t until about 10 years later at my first job in the Computer Crimes Division of the Attorney General’s Office did a light bulb go off. Was I being groomed online by this complete stranger? It struck a very powerful and scary chord.

I was a good kid with good grades, very involved in extracurricular activities, with a good group of friends and a very supportive (and strict) family. My Dad never thought he had to have this conversation with me for two reasons: 1. He didn’t know enough about the Internet to know what to say; 2. He knew I was a good kid who had a track record of making responsible (for the most part) decisions, and didn’t think he needed to worry. These two factors led to me having a 6-month online relationship with a complete stranger, which could have potentially led to a very dangerous situation.

In my professional experience, I have seen and heard these stories many, many times and often they don’t end like mine did. I plead with parents to talk to their kids constantly about what’s going on in their digital lives, and witness the struggles parents of tweens/teens have approaching the subject when their kids are in the thick of social networking, gaming, texting, and all other things technology. The reality is, there are so many awesome things for our kids to be doing with the latest technologies; however, not talking to them about responsible decisions with these powerful tools is like handing them the keys to the car at 16 no questions asked.

As my two-year-old proficiently navigates the many wonderful apps on the iPad, I couldn’t be more excited that, from these, she can already write a few letters, knows what sounds each letter of the alphabet makes, and is already doing fairly complex puzzles. However, she knows she’s not allowed to use YouTube without our help (some great Sesame Street clips on there), and knows that she’s only allowed to access what’s put in her designated folders. In our house the iPad it not a toy, and we limit her time on it. These are learned behaviors that we’ve been discussing since she picked up my iPhone at 14 months, and we plan on stepping up our conversations as her interests change or as we observe natural changes in her behavior.

The tech talk: start early, and do it often. Your child will naturally expect regulations as he/she ventures into things like social networking or chatting, and it will be much easier to establish these rules and have conversations about them if you’ve been having them all along. It will make your child safe, and your job much easier as the years go on.

Former Director of Internet Safety for the Massachusetts Attorney General’s Office and Intelligence Analyst for the Massachusetts State Police, Katie LeClerc Greer travels the country educating students, parents, administrators and law enforcement officers about technology and digital responsibility/safety. Katie was recently named as an advisory board member for iKeepSafe, and serves as an industry expert and advisor for various government and private agencies around the country.  You can learn more about Katie at: www.klgreer.com