NEW POLL: Half of NYC and Suburban Teens Have Been Cyberbullied

Most Teens Spend at Least 3 Hours a Day Socializing Online

As middle and high school students spend more time online than ever before, a survey of New York City-area teenagers and parents finds cyberbullying is a prevalent issue that touches a vast majority of area children. The poll of 1,000 parents and teens in New York City, Long Island, Westchester and northern New Jersey was conducted by AT&T and the Tyler Clementi Foundation.

“This first-hand account of what teens are experiencing online is a powerful wake up call to the pervasiveness of cyberbullying and its potential damaging effects,” said Marissa Shorenstein, New York State President of AT&T.  “The results show that awareness of cyberbullying is high, and more education is needed to help teens make better online choices. By better understanding the extent of the issue, AT&T and the Tyler Clementi Foundation hope to help teens and parents more safely navigate a connected world.”

To help that navigation, AT&T created Digital You last year. It’s a comprehensive program offering tools, tips, apps, guidance and community education events for people of all ages and levels of online experience. It provides education about using the Internet for a positive and safe outcome.

“These stats speak to the staggering problem of cyberbullying,” said Jane Clementi, founder and board member of the Tyler Clementi Foundation. “It’s outrageous and simply unacceptable to allow this to continue.  Aggressive behaviors in the electronic world can cause great pain and destruction to one’s spirit.  We must instill in our youth the knowledge that technology is only as good as the people who use it.  It can be a wonderful and useful tool or a weapon of great harm and destruction, as in the case of many young people today, including my son Tyler.”

In addition to using the poll to raise awareness, AT&T and the Tyler Clementi Foundation will work with the All American High School Film Festival to challenge student filmmakers with creating short films to address the impact of cyberbullying on teens’ lives.  Students from around the country will have the opportunity to shoot, edit and produce a final cut in New York City in time for Cyberbullying Awareness Month in October. The winning film(s) will be shared with middle and high schools throughout New York later this year. 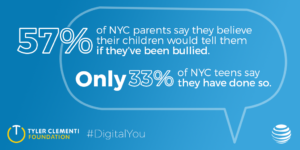 1 in 3 teens say they prefer to socialize online rather than in-person, even though it may not always occur within a positive community. Of teens surveyed, 41% describe the comments their peers post online as mostly mean. Experiences can differ based on gender, race and where they live.