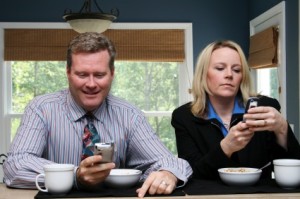 We know we live in a digitally connected society, with 92% of adults attached to their cell phones, 52% of them are fully engaged in social media (Facebook being their favorite by 71%) and now research has revealed that it’s not only women (which has been leading the social media force) men have arrived!

In the latest survey from PEW Research, men are catching up with women on social media.

Although the overall percentage of men and women who report using social media is now comparable, there are still some gender differences on specific platforms. Pinterest, Facebook and Instagram have a larger female user base, while online discussion forums like Reddit, Digg or Slashdot attract a greater share of male users.

It’s interesting that men and women are both engaging in social media, maybe in different platforms however spending time connected.

Overall this analysis reported that men were more engaging in forums rather than Facebook or Instagram platforms.  Personally I do see more women than men posting on Facebook and especially Pinterest (which I still haven’t figured out). This isn’t to say men aren’t on Facebook, since I also see many. Especially men that are advocates in something they are passionate about, they will engage in Facebook groups.  Huh, interesting, I just said – they mostly engage in groups, which are like online forums.

On the other hand, online discussion forums are especially popular among men. One-in-five male internet users say they read or comment on sites such as Reddit, Digg or Slashdot, compared with only 11% of online women. 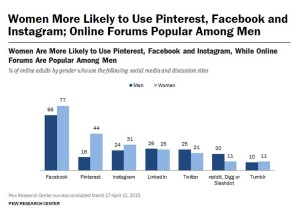 My hope is that these men and women are also parents that are now engaging on social media and learning about their children’s new playgrounds.  We know the moms are there – and with the increase of men, it’s a good sign that they are now on board with becoming involved too.

Forums can be a place to find out more about parenting issues, asking questions and getting support if you are going through rough patch in life.

It’s great that men (possibly dad’s) are reaching out to others and possibly helping others too. We need to created a cyber-society of compassion and support for each other whether it is on Facebook, Tumblr or any forum. No matter what gender you are – chances are very good you have something you can offer another person.  A simple kind word or maybe a referral or recommendation to a local restaurant!  Civility and good manners start at home.

Most importantly, you are a digital role model for your child. Mind your cyber-etiquette in any social media platform you are mingling in.