Facebook is the most popular and frequently used social media platform among teens; half of teens use Instagram, and nearly as many use Snapchat

When I read that on the overview of the latest PEW Study titled, Teens, Social Media & Technology 2015, I did chuckle a bit.  I have argued that our youth are not leaving Facebook, while some reports continue that they are.

Facebook still has many functions that the other social media platforms simply don’t have.  ThirdParent recently wrote an excellent post about some ideas why Facebook is still  viable with our teenagers, which I found to be very interesting and accurate.  As they said, in many instances you need a Facebook account to be able to sign-up for other accounts.

However I am still someone that believes people are still very active on Facebook, engaging, interacting, creating events, invitations, vanity pages and more.  These are things that sites/apps like Snapchat, Instagram or Twitter don’t offer you.

Now to some key findings in the report.

The Internet is a ‘near’ constant for some teens.

The study revealed that the typical teen sends an average of 30 texts a day.

It’s all about engaging, interacting and living in our participatory culture – and the teens are no different! 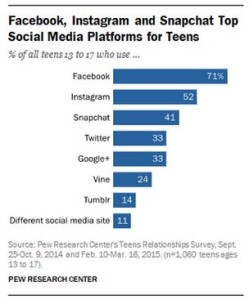 Read the entire report for more details based on other factors – including teens’ ethnic background as well as their economic background.

With all these social media driven teenagers, parents need to remember to continue their daily chats about digital citizenship.  What goes online, stays online – and can literally dictate your child’s future.

There is no such thing as a delete key on the Internet – there is only that moment that you “pause” before you post.  Preach it everyday – until it becomes habit with every email, text and post.