In a recent PEW Research Survey, Online Harassment, 66% of Americans say they have witnessed some type of harassing behavior directed toward others online, with 39% indicating they have seen others targeted with severe behaviors such as stalking, physical threats, sustained harassment or sexual harassment.

The good news is people are starting to take cover (implement basic precautions to protect themselves) and/or become upstanders.

Just over a quarter of Americans, 28% of Americans say that observing the harassment of others has influenced them to set up or adjust their own privacy settings. 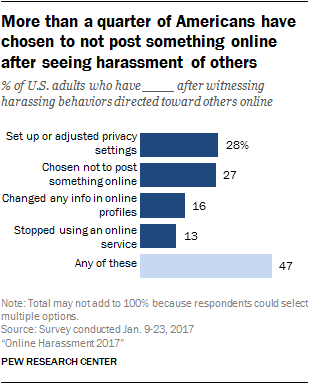 Harassment has also caused 27% of Americans to stop sharing or commenting on posts after witnessing abuse on the platform, while 13% have decided to stop using a social media network all together due to the severity of harassment.

It also can impact adults mental health, while 8% say that even reading the cruelty online, although it isn’t targeted at them, makes them very anxious.

We frequently hear the word upstander as it pertains to kids with bullying and cyberbullying, but now grown-ups are understanding the importance of stepping-in online.

Three-in-ten Americans (30%) say they have intervened in some way after witnessing abusive behavior directed toward others online.

This latest survey by PEW Research confirms that no one is immune to digital harassment – at any age. This is a reflection of the decline of civility online yet also tells us that people are trying to climb out of it.  We can do this – 75% of Americans believe it starts with us. Today there are also many resources for adults to turn to for help.

Check out my book, Shame Nation: The Global Epidemic of Online Hate (Sourcebooks). From surviving, prevention and overcoming digital disasters, you will hear inspiring stories from people that came through dark places and top experts from around the globe.