Just How Many Technological Devices is Too Much for Your Teen? 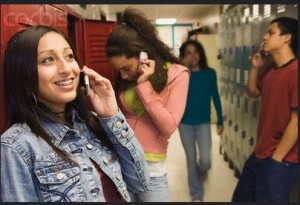 Your teens and you probably have more in common than you think in today’s technological world. For one, you are both probably tuned in to the latest advancements in technological gadgets, be it cell phones, home entertainment systems, music, and more. But is that necessarily a good thing?

In the cases of many parents today, looking back on their teenage years and watching the world in which their teens live, they see a big difference. It oftentimes boils down to this: How much technology is too much for your child?

According to research from the Pew Internet and American Life Project, more than three-fourths of teenagers have cell phones in their possession (a higher percentage than possess computers). The research goes on to point out that on average, teenagers send 50 text messages a day, or 1,500 a month. Many teenagers are also logging onto the Internet on their phones (approximately 35%, according to Pew), yet the majority of them still utilize computers to go online.

So, should you as the parent of a teen be worried that too much of their time is being plugged into the technology world?

The Pros and Cons of Our Technological World

It is important to look at both the pros and cons of such devices before you make a final judgement on whether or not your teen should have them in their possession.

First, here’s a look at some of the most popular items and how they can negatively impact your teen:

* Phones – How many times have you had the discussion with your teen about cell phones and driving? As statistics have shown, talking or texting on a cell phone while driving can be a recipe for disaster. Along with the fact that teens are typically not the greatest drivers due to their lack of experience behind the wheel, cell phones in the hands of teen drivers not only puts them at risk, but also other drivers on the road. If your teen insists on having their cell phone in use while driving, make sure it is a hands-free device.

* Computers – Assuming that there is a computer in your home and you are the parent of a teen, it is important to properly monitor their online activities. As too many parents know, teens–especially young girls–are prime targets for online sex offenders. Whether your teen is 13 or 19, if they are living under your roof and your rules, you have every right to monitor their online footprint. That being said, it is good for parents and teens to come to a mutual agreement in this area so that the teen does not tune out your concerns, feeling you are trampling all over their privacy.

* Video games – You no doubt remember your teenage years a few decades back when video games were all the rage. There is a strong likelihood that you played them for hours and hours every week, sometimes driving your own parents nuts. In today’s video gaming world, more and more of the games involve more violent themes than a few decades ago, so parents should have their finger on the pulse of what their teens are playing. If your teen is addicted to such video games morning, noon, and night, have a talk with them about your concerns and what they can do to alleviate them.

Now, here’s a look at the same items and how they can positively impact your teen:

* Phones – Your teen is out on a date and/or behind the wheel. They run into some form of trouble and need to reach you immediately. Having a cell phone on hand is a great means by which to reach out for help, be it a broken down car, an injury, or a run-in with a stranger or the law. Parents should be able to sleep a little better at night or relax more during the day knowing their teen is armed with a way to communicate with them quickly if necessary.

* Computers – For teens that are considering college or the military down the road or even going out into the working world right after high school, computers are essential. Unlike when you went to school and computers were still in their infancy, today’s job world and furthering one’s education demand computer skills. Computers are a great means by which your teen can research, write reports for school, and more. While you do not want your teen addicted to the computer, by all means encourage them to have regular interaction with a laptop, desktop, or mobile device.

* Video games – Given that there is a good chance your teen is not going to go into a career in the video gaming world, you have a good argument for not wanting them to spend 24/7 playing video games. On the other hand, games that are not violent-laden can help your teen with computer skills, thinking skills, reactionary skills, and more. There are many video games out there where both you and your teen can compete together, bringing with it more family time.

With Knowledge in Hand, Is it Time to Talk to Your Teen?

Now that you can see the pros and cons of such devices, is your teenager properly spending time on these items, or are they what you might consider out of control?

If you are not sure how to go about monitoring your teen’s time with cell phones, computer, video games, and other such devices, at least know some of the warning signs of too much activity. From browsing online sites they should not be viewing to wanting to borrow your credit card for online purchases, nip the problem in the bud before it causes trouble for both you and your child.

In the event that you are seeing your teen’s grades drop, if they seem more tired than usual, if you witness them removing themselves from family activities to spend more time in front of a computer and/or playing video games, you need to have a talk with them.

Today’s technology presents great opportunities for teens to learn, expand their horizons, and be in constant contact with you. It also has the same abilities to make teens become removed from the family, limit their growth, and come in contact with the wrong people.

Contributor: With 23 years of experience as a writer, Dave Thomas covers a wide array of topics from home improvements with Cincinnati air conditioning to buying the right electronic products for your home.